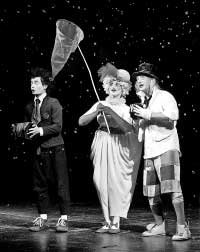 The song "Blue canary" became popular in USSR owing to efforts of Viacheslav Polunin, Robert Gorodetsky and their mim-troupe "Litsedei". They used it for musical setting of their best-known number. As for me, I treat Polunin's work rather coldly, but for that that they returned this song from nonexistence I am ready to forgive them all and even treat them a great actors. It is strange (for us in Russia), but "Blue canary" song is tottally forgotten either in US (where it was presumably written) and Italy. But its English variant is known in Japan and even performed in Japanese. So, what do we know about it?

English and Italian lyrics of the song may be seen below. Difficult to say certainly what one is original and what one is a rehash, I have no reliable information about it. Hope to clear up this some day; perhaps the basis of music or lyrics was really an old Italian folk song.All sourcess tell that the author of music is Vincent Fiorino, English lyrics also belongs to him. First time the song was performed in US in 1953 by "group of companions" known as whether "Vince Fiorino trio" or "Vince Fiorino orchestra" (vinyl disk was printed in February, 1953).

Judge by his family name, Fiorino was Italian or had Italian background. Then Italian lyrics should be the original? But "Blue canary" are definitely English words, in Italian we should have "Canarino blu". Furthermore, English lyrics corresponds to melody better - in Italian variant we have trully sad mood while the music is in major. Finally, both in original sheet music, which I managed to get in Australia (see Boris Tarakanov's Sheet music archive ) , and in original recording of The Vince Fiorino orchestra we have lyrics in English. Newertheless - who knows? Author of Italian lyrics is recognized as Carera. 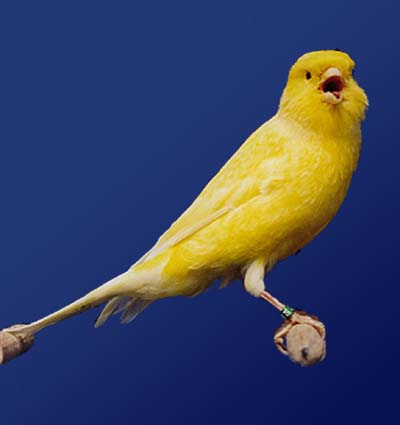 But why a canary - and blue color? Actually she is not in color of blue - she is in a bad mood. Neither in English, nor in Italian lyrics may be found a reference to blue color, but the canary is sad in both cases. One of explanation of the term "blue canary" can be found in Internet. In the old days canary birds were used as mine gas indicators. Going down to the mine workers took a canary bird in the cage; if a canary died being poisoned by mine gas, men still had a time to return. This is the cause why she feels so blue, this canary.

There are some recordings of this song available in Internet (some references in the following list are still working, I managed to collect ALL eight variants of the song which are listed below):

1. The Vince Fiorino Trio, 1953 (English) - original performance by the author's troupe, standard "english" arrangement which was repeated by many other performers, rather unpretentious.
2. Marisa Fiordaliso & Carlo Buti, 1956 (?) (Italian) - but not Frankie Lain, as the filename says.
3. Dinah Shore, 1953 (English)
4. Yukimura Izumi (English in English and Japanese)
5. Maria Koseva & Nikola Tomov (as if Italian).
6. Frank Chickens, 1984 (Kazuko Hohki & Kazumi Taguchi) (English) - like two drunken girls singing Karaoke.
7. The Peanuts (English) - one more Japanese odd job.
8. Renate Holm, orchestra of Bela Sanders, ?1953 (German) - the third variant of arrangement and lyrics.
9. Inge Donzowa (German) - the same German variant, but even more academic. Don't be confused by her name - she is German, Donzow is the family of her husband.
10. Some Japanese or Latino group from some vynil disk with somewhat like "Greatest hits of 50ths".
11. Search engines give us links to this song performed by Russian group "Redkaya ptitsa" ("Rare bird"), but without vocal and the melody is wrong.
12. Ugly pank version from "Boney-Nem". Nevertheless, it is possible to hear it (one time).
13. Elder Barber,1954 (испанский) - "Canario triste" ("Sad canary") in Spanish with intro from "Russian gipsy" - the fourth variant of arrangement and lyrics!

What is to say in addition? Koseva & Tomov (they are Bulgarians, "Polunin's" phonogram) are singing nicely, but they confuse words. It seems that they are singing by ear, without seeing Italian lyrics. That is why the legend exists that Italian lyrics is in "rare dialect which none of living Italians can understand".

All variants of lyrics are procured by me, myself, and not easily. Since the song is forgotten all over the world, it was impossible to find any reliable information in Internet. As well as I was unable to "catch" lyrics from the phonogram, even from English one. Therefore I decided to go tried way of searching of information - I began to adhere to persons who potentially could help me. Act the same way as me - and fortune will smile you. That is another story - translation from Italian to Russian without speaking Italian and knowing nothing about Italian grammar. But it was successfully completed by iterative comparison of different auto-translations to Russian and English with additional searches in many online dictionaries. Final translation in English retelling was approved by Italian comrades. German and Spanish variants was translated the same way much more quickly. Apparantly, it is accounted by better quality of auto-translation tools from that languages.

Also I tried to catch music of Italian variant of the "Blue canary", and I was relatively succeeded (bluecanr.mid - optimized for SB Live's standard 8Mb patch). Of course, I did not interpret all passages and, unfortunately, I did not understand the return from orchestra fragment, but I am satisfied by the result. By the way, in original sheet music of Fiorino used this arrangement (fiorino.mid). To put it mildly - unpretentious.

Renate Holm performed this song in German! She did it originally, lyrically, almost like a romance. By the first time I disliked the arrangement, but I had inverted my opinion after multiple runs through.

And Yukimura Izumi sang in Japanese:


"Lonely blue canary, my friend, every evening sings a nice song – a dream about her home"

Analysing collected material, it is possible to see TREE different story lines of the song: